FITZ AND THE TANTRUMS | IF YOU LIKE HALL & OATES YOU WILL LOVE THEM!

For Fitz and The Tantrums, building a buzz around a retro R&B sound isn’t about nostalgia or reviving this and that. It’s as simple as instinct and emotion.

“I think people are hungry for an authentic, human kind of sound,” says multi-instrumentalist James King. “That golden era of American music: black music of the ’60s, Motown, funk.”

King and his bandmates — Michael “Fitz” Fitzpatrick (vocals, occasional keyboard), Noelle Scaggs (vocals), Joseph Karnes (bass) and John Wicks (drums) — share that vision. Fitz and The Tantrums came together in December 2008, when a melancholy Fitzpatrick wrote what would eventually become one of the young band’s staples: the hardy garage-soul romp, “Breakin’ The Chains Of Love.” 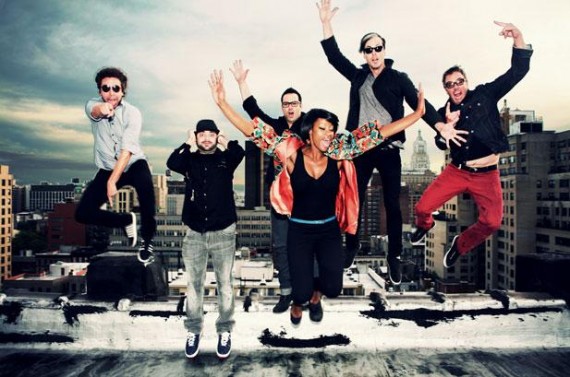 “It came out of being heartbroken,” Fitzpatrick tells us during the band’s Tastemakers taping. “I lost my mind and needed to write some songs. I got possession of an old church organ and started writing. I wrote the song and quickly called James, who I went to college with. He came over and started building horn sections over it. We looked at each other and said, ‘We gotta play this stuff live!’ I asked who we could call for vocals and he said, ‘One lady and one lady only.’

Noelle Scaggs had toured and collaborated with King in the past, and her vibrant backing vocals proved to be the missing ingredient in Fitz’s sound.One of the most interesting things about the L.A. band is a lack of guitar, both live and on record. “I don’t think people realize at first,” admits Fitz. “I’ve got nothing against guitars. My dad is a jazz guitarist; I grew up with guitar in my head. But because there isn’t a guitar, it pulls your ears in ways that you’re not necessarily conscious of. It lets the rhythm section shine and creates this great pocket for Noelle and I to harmonize.”

Debut LP “Pickin’ Up The Pieces” cracked the Billboard 200 chart (peaking at No. 140) in addition to Independent Albums and Heatseekers Albums, peaking at No. 2 and No. 18, respectively. Acclaim for the record led to a bombardment of new opportunities, including performances at Lollapalooza, “The Tonight Show” and “Jimmy Kimmel Live.” For Fitz, the recent slew of success came full-circle when his band returned to the scene of their big break. “We went back to SXSW in 2011 as one of the belles of the ball. It was the dream of what the festival should be: unsigned band goes to SXSW, gets discovered, gets signed.”

Warning: SimpleXMLElement::__construct(): Entity: line 3: parser error : Extra content at the end of the document in /homepages/41/d148502228/htdocs/zwippgruppe/wp-content/themes/ares/lib/admin-default.lib.php on line 56