For the hardworking Scottish alternative rock band Biffy Clyro, their latest album Opposites is a fitting triumph after so many years of roughing it on the road.

With an aggressive touring schedule and steady dedication to the A + B = C formula of rock revolution, Biffy Clyro has made a name for itself as one of the top bands in the United Kingdom. And that classification is well within its rights. Sure, Muse and Coldplay are at the forefront of most minds when thinking about the hottest U.K. bands of today, but Biffy’s catchy riffs and atmospheric choruses could move them ahead of the pack.

For starters, take a listen to the lead single, an emotional track called “Black Chandelier.” The “drip, drip, drip,” of the entering vocal sets you up for a “cute little cup of cyanide” that calls to mind a broken relationship with one party certainly looking to get things back in order. It’s that honesty that makes Opposites work. 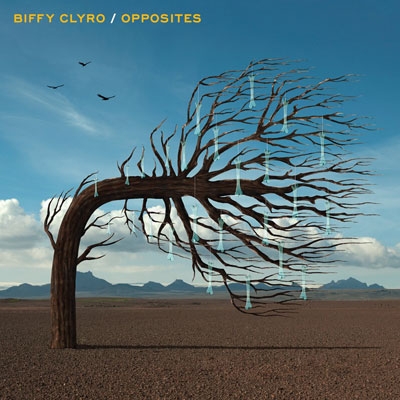 Sure, the double-disc format might not be for all. At times, it can get tedious, leading fans to ask about the need for an extra 10 tracks if an artist can just put out another album in a year. Still, some of the greats have done it incredibly well. Smashing Pumpkins’ Mellon Collie and The Infinite Sadness was a heartbreaker, but it needed two discs to fully harness its power.

Even Biggie Smalls’s Life After Death needed two chapters for the Notorious B.I.G. to fully weave his story. That’s what Biffy Clyro does well with Opposites. The trio – which includes frontman Simon Neil, bassist James Johnston and drummer Ben Johnston – puts together 80 minutes of radio-friendly alt-rock that will have fans singing the refrains for days. There are ballads like “Fog” and “Skylight” that could bring the listener to tears. The lyrics in “Skylight” even talk about the “time to sing the saddest song.”

They are not, in fact, sad songs, but there is so much heart behind them – in Neil’s plaintive voice – that one can’t help to clutch his/her chest with arresting anticipation of the outcome. Then again, there are the staccato drums and guitars of “Stingin’ Belle,” which challenge listeners to “grow some balls and speak your mind.”

All in all, Opposites represents Biffy Clyro’s step into the next level of pop-punk-rock. It should be noted that Biffy Clyro’s “Many Of Horror” was a massive hit on Britain’s X Factor, when winner Matt Cardle made waves with his recorded version. And 2007’s Puzzle and 2009’s Only Revolutions were solid chart-hitters, but Biff’s mastery of the quiet rhythm leading up to the bombastic chorus is evident in some of their more ballady tracks like “Different People” and “Sounds Like Balloons.”

Opposites represents a true retrospective of Biffy Clyro’s entire career. There are the thumping numbers with the call-and-response choruses, there are the Jimmy Eat World grunge-tinged rockers and there are a few ethereal jams, like “Fog.” No matter what direction Biffy Clyro goes with Opposites, however, the underlying? theme is that this band is ready for arena rock.

Watch the video for “Black Chandelier”

Warning: SimpleXMLElement::__construct(): Entity: line 3: parser error : Extra content at the end of the document in /homepages/41/d148502228/htdocs/zwippgruppe/wp-content/themes/ares/lib/admin-default.lib.php on line 56